So first off I’m a Krav Maga instructor not much of a movie buff! So why am I reviewing The Gunman?? Well because the fighting style used in the Gunman is Krav Maga, say no more! If Krav Maga is involved i’m there. 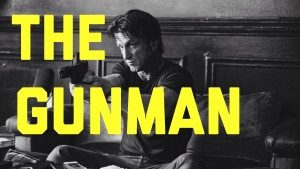 The Film’s director, Pierre Morel is at it again, turning middle aged men in to new age action stars seems to be the in thing, first it was Liam Neeson a modest 50 odd year old in Taken. This time Morel is working with 54 year old Sean Penn, who with The Gunman is aiming to be Hollywood’s most unexpected new action hero. Penn plays Jim Terrier a reformed hit man out to discover just which former colleague put a hit on him 8 years after he carried out an assassination in the Congo. Although Jim is trying to live his life on a more honourable plain than in his old days, now working for a NGO digging wells in Africa, he can’t escape his past when it comes back to haunt him with vengeance. This inevitably leads to a action packed chase across Europe as Terrier tries to find out who has put the hit out on him.

I have to say at 54, Sean Penn is in phenomenal shape for this movie (must be due to the Krav Maga training). What I found interesting was Sean Penn was already a student of Krav maga and stressed its importance of use in the movie.

This type of Film isn’t for everybody, I watched it just to check out the Krav Maga, which I have to say they did do a great job with the fight choreography. The storey line was pretty much what I expected. Bottom line is, if your in the mood for some hard hitting action, want to see some Krav Maga in motion and don’t care to much for a particularly foreseeable plot then the Gunman is worth viewing, in fact check it out just for the Krav if your dedicated Kraver.